Andrew Duff “Brexit and the Future of Europe”. 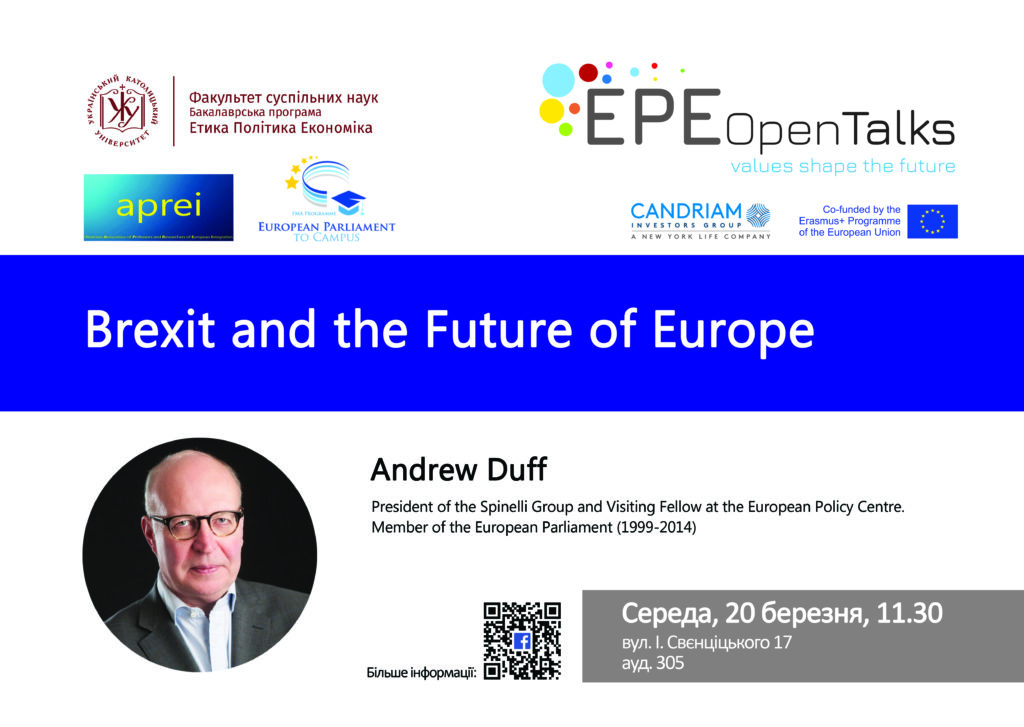 We invite to Andrew Duff lecture – “Brexit and the Future of Europe”.
The lecture will be held on Wednesday, March 20, at 11.30 in 305 auditoria, Svencytskiy St., 17.
Registration via the link: https://cutt.ly/CwwGD0
Andrew Duff is the President of the Spinelles Group, an invited researcher at the European Council on Foreign Policy (Brussels, Belgium), a Member of the European Parliament from the United Kingdom (1999-2014).

Co-organizers of the lecture are the Ukrainian Association of Teachers and Researchers of European Integration and the program “European Parliament – to the campus”.

Andrew Duff is President of the Spinelli Group and a Visiting Fellow at the European Policy Centre.
He is a member of the governing board of the European Policy Centre (EPC); of the advisory board of Transparency International EU; and of the European Council on Foreign Relations (ECFR). He is an honorary member of the board of the Trans-European Policy Studies Association (TEPSA).
Duff was a Member of the European Parliament (1999-2014). He was a spokesman on constitutional affairs for the Liberal group (ALDE) and a member of the Convention on the Charter of Fundamental Rights and of the Convention on the Future of Europe. He represented the European Parliament at the Intergovernmental Conference on the Treaty of Lisbon.
He maintains a strong interest in foreign and security policy and is a specialist in Turkey.
Duff was President of the Union of European Federalists 2008-13.
From 1993-99, he was Director of the Federal Trust for Education and Research in London.
He has published widely as a scholar and practitioner of European integration. His latest book is On Governing Europe: a federal experiment (January 2018).
He is the author of the Spinelli Group’s Manifesto for the Future of Europe: A Shared Destiny (September 2018).
He tweets @AndrewDuffEU